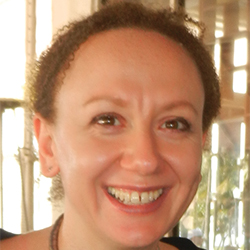 Arianna is a Clinical Senior Lecturer and honorary consultant psychiatrist.

She studied medicine in Italy and Germany. After completing her clinical training in psychiatry, she did a PhD on bipolar disorder in pregnancy and after childbirth at the MRC Centre for Neuropsychiatric Genetics and Genomics in Cardiff.

In 2014 she was awarded a prestigious Marie Curie International Fellowship by the European Commission and moved to the University of North Carolina at Chapel Hill in the United States, where she still holds an honorary position.

Since coming back to Cardiff, she has been working to establish a programme of research on the neurobehavioural effects of gonadal steroids, in addition to continuing the longstanding work on bipolar disorder genetics.

As part of the Cardiff University Psychiatric Service, she has also set up a Reproductive Mental Health Clinic. The clinic offers second opinions on the risk, diagnosis and management of severe psychiatric disorders associated to women’s reproductive events, such as the menstrual cycle, perimenopause and hormone therapy.